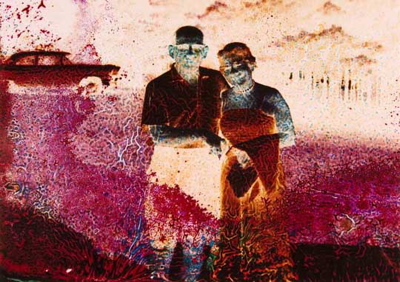 I got a lovely email from a young artist Ryan Van Der Hout, a recent graduate of the Ryerson photography program in Toronto. He calls his phot-based work, which doesn’t involve the use of a camera, “photographic sketches that highlight the possibilities of the medium.”

He’s got an exhibition on at Toronto’s Lonsdale Gallery from May 26- June 27, 2010, with an artist’s reception this coming Saturday.

He says: “A photographic image made without a camera explores the materials themselves rather than the outside world seen through the camera. Utilizing photograms, enlargergrams, light drawings and cliche verre, what is seen through my work is the process of making and the interaction of light with photographic paper. These are often manifested through the shadows of our world, but sometimes through the direct action of light. While these images are not necessarily the recording of the outside world, the paper still records – photography always records – the moment of its own creation.”

The work on view at the show is from his Light Abstractions series, but from what we see on his website, we much prefer some of his other work, like the pieces shown here:

Photogram: Produced by placing objects directly onto the surface of a photo-sensitive material, such as photographic paper, and then exposing it to light. The varying tonality of the resulting silhouetted image is determined by the transparent, translucent and opaque qualities of the object photogramed.

He also describes some of his other processes:

Enlargergram: Similar to a photogram, however the object is not placed directly on the photographic paper but projected directly upon it through an enlarger as one would work with film in an enlarger.

Cliche Verre: An image is drawn or etched onto a glass plate or film and photogramed, the resulting image is a highly textured rendering of the original drawing.